Today we traveled about forty-five miles east of Cusco to the ruins of Tipon, thought to be an Inca agricultural experimentation area.  The Incas were master farmers, developing an elaborate system of terraces to grow crops on the steep Andean mountainside.  Their sophisticated irrigation system of stone canals is probably unsurpassed for  making efficient use of water resources.

Tipon is a beautiful example of agricultural terraces. Because it was fairly recently excavated, it is still somewhat off the tourist track.  For most of the hour we were there, there were no other people except the workers who were excavating one of the canals.   Our guide used to hike and camp there, but now access to the area is much more controlled.

From Tipon we went to the city of Oropesa where the  Spanish weighed the gold and silver.  As the Spanish married the locals, it became hard to tell from appearance alone who had Spanish blood and was, therefor, entitled to be treated with more respect.  So the Spanish had all the women of mixed blood wear white hats with red ribbon. 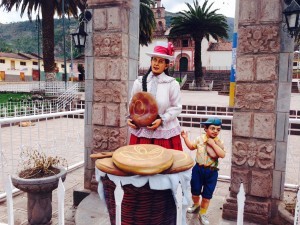 Oreposa is also Peru’s capital of bread.  Family bakeries rent the wood-fired bread ovens for four hour shifts and, in that time,  make hundreds of loaves of bread, all by hand.  The wonderful smell of baking bread permeated the town square.  We observed a family of six make and bake bread, and then, the best part of all, we tasted the wonderful bread hot out of the oven.