After watching Monuments Men and learning more about the Ghent Altarpiece, we decided to make a day trip to Ghent, a thirty-minute train ride from Bruges.  I always struggle a bit to figure out bus systems, so getting our Tram tickets and getting from the train station to Kornmarket, where we wanted to go, was a little hiccup. Two different kind strangers helped us, and the rest of the public transportation components of our day worked great.

The highlight of the day was seeing the impressive Gothic Cathedral of St. Bavo and its beautiful Adoration of the Mystic Lamb altarpiece.  The Ghent altarpiece, as it is most frequently called, is in a special darkened chapel behind glass.  We felt lucky that for the first third of our time viewing the altarpiece, we were the only ones in the room.  It never got as crowded as we expected.  The Ghent altarpiece has been called the most influential painting ever made because it is the first masterpiece in oil and is probably the most stolen.  The lower left panel is still missing and has been replaced with a copy.

The outside of the cathedral was covered in scaffolding, but the inside was stunning.  An organist playing the second-level organ as we entered certainly enhanced our experience. 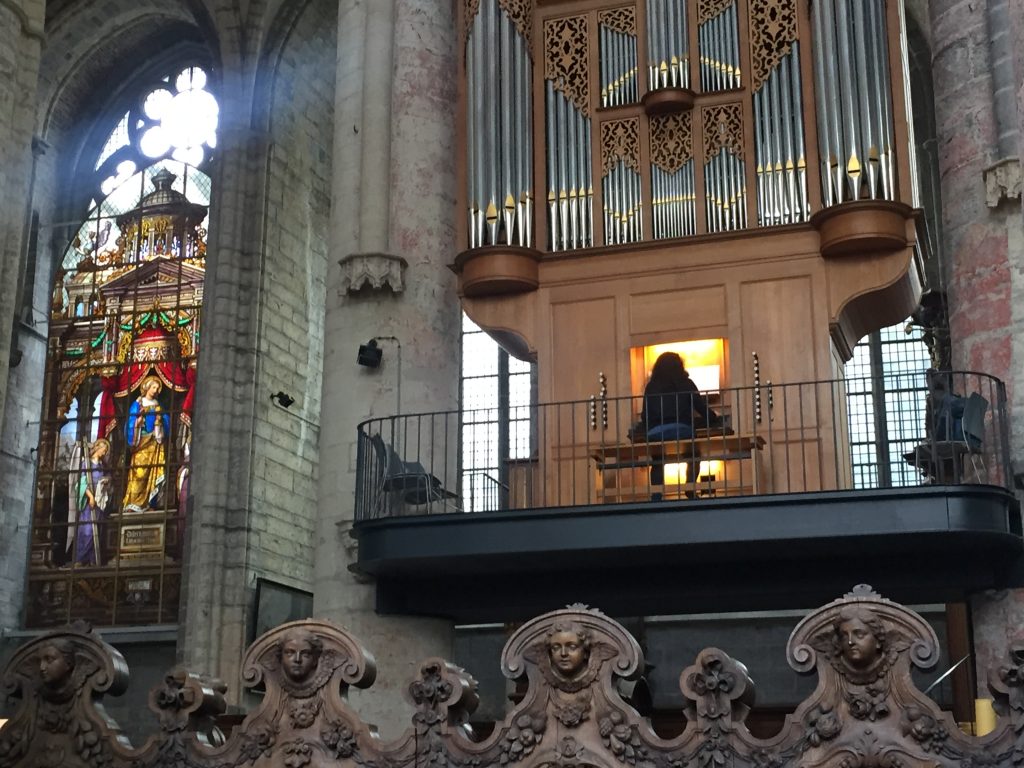 An amazingly intricate carved pulpit with a golden serpent and numerous Carrara marble statues was on the side of the nave.

We ate lunch in the Patershol district at Souplounge, a little soup shop.  Before ladling the soup into the bowl, they put little meatballs, fresh chopped onions and tomatoes and fresh herbs in the bottom.  As we walked out of the restaurant, we noticed two intricate, quirky gabled buildings at the end of the road on our right. 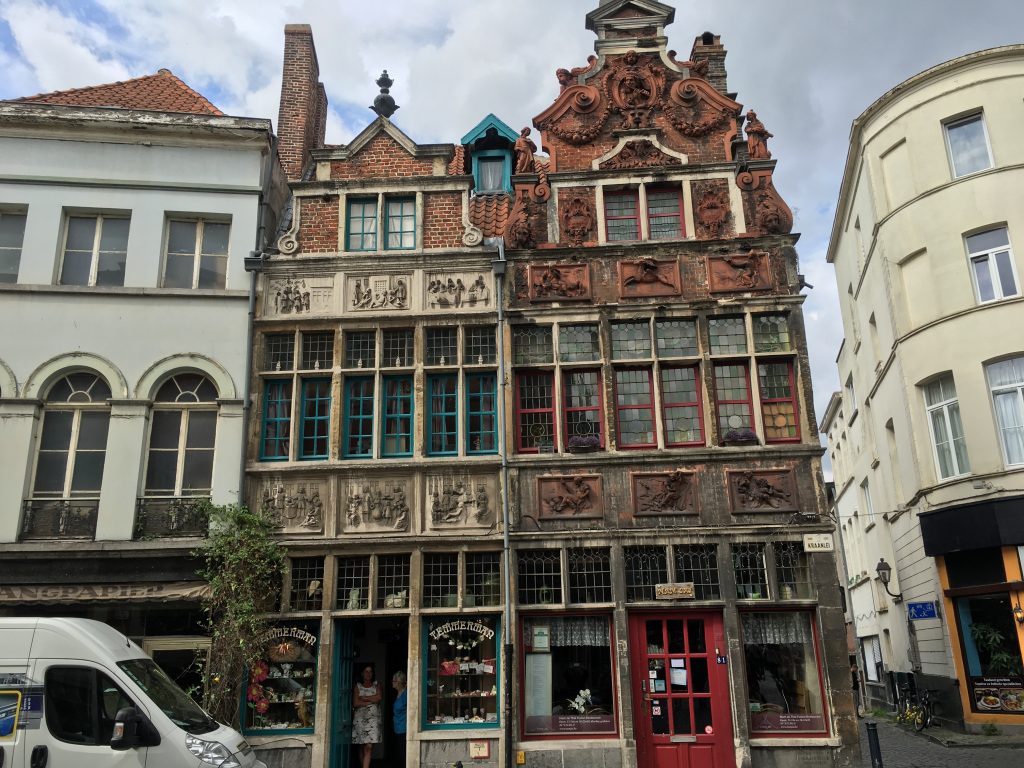 Walking home from the train station we discovered the amazing merveilleux,a small cake that originated in Belgium.  It is an airy delicacy of meringue covered with whipped cream and various toppings.  We had passed Aux Merveilleux de Fred  on 3A Eiermarkt every day as we walked to the square and watched the bakers creating the little mounds but had never tried them.  It is a good thing I waited until my last day here to have one because I think I could become seriously addicted. 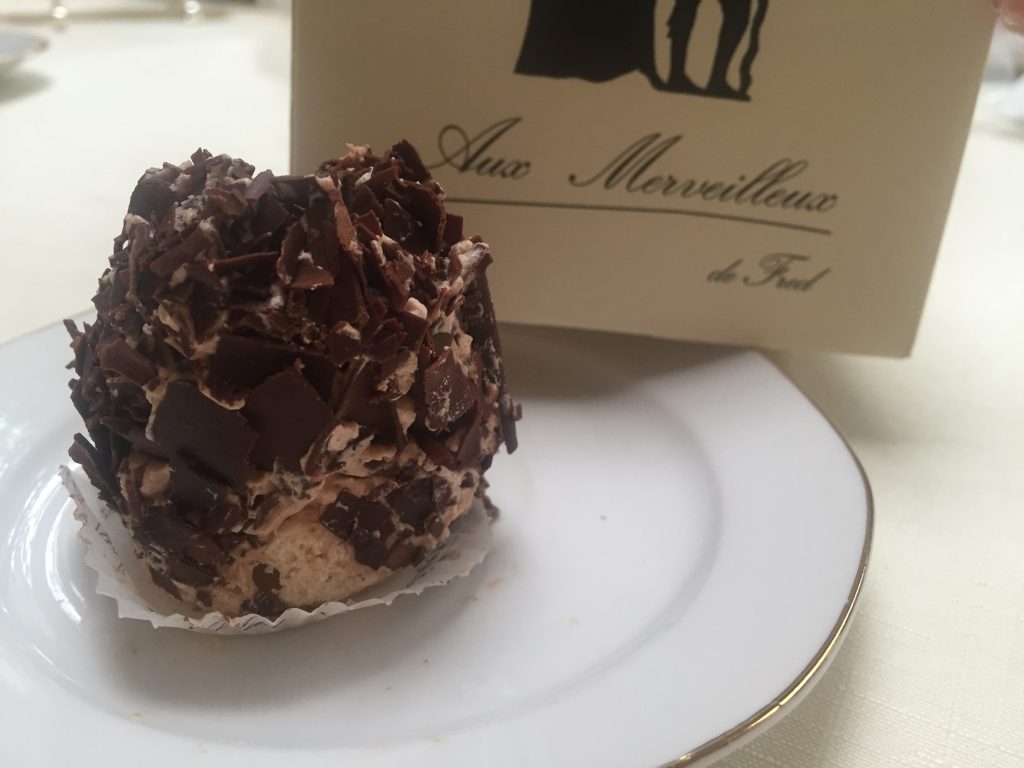 We were going to have one last Brugse Zot at the De Halve Maan Brewery, but they were closed to set up for a huge block party.  They were celebrating the opening of their pipeline and thanking supporters and businesses around them who had been inconvenienced by the installation of the pipeline.  We have enjoyed supporting their beer this week, but, alas, we were not on the invite list. 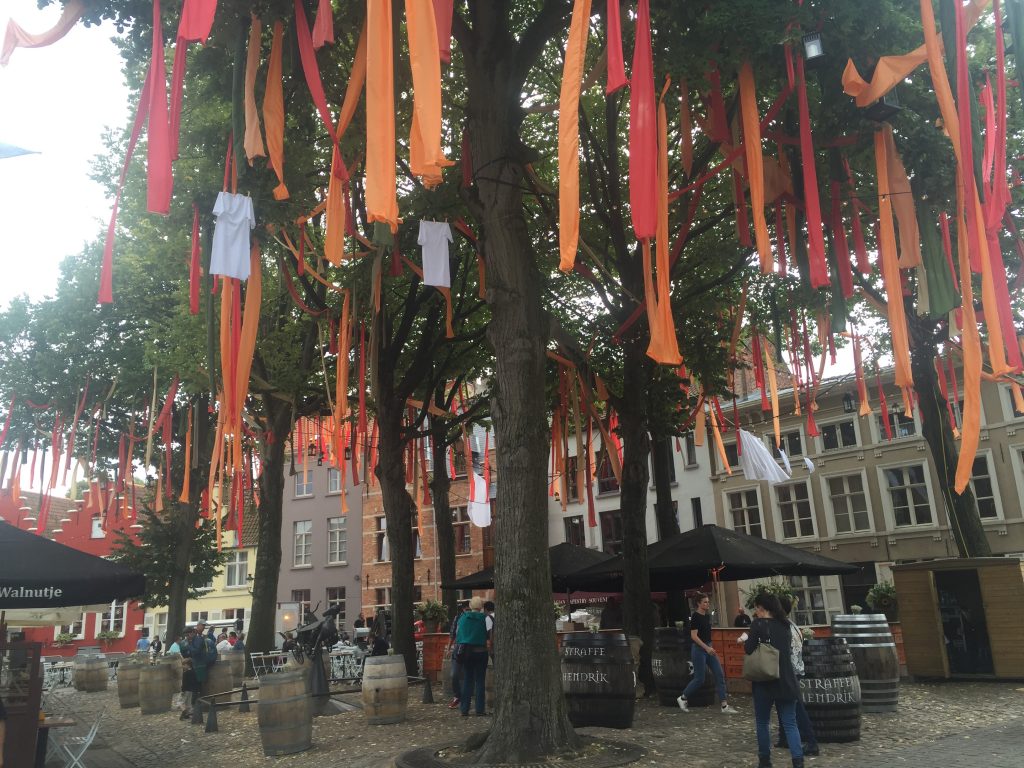 Bruges has been called the “Michelin epicenter of Belgium”, a country with one of the highest concentrations of Michelin-starred restaurants in the world.  On our host’s recommendation we decided to try Kok au Vin, Ezelstraat 21, one of the restaurants that Michelin’s Bib Gourmand identified as a rising star. We started with an organic, farm to table artichoke.  As much as possible, their produce and meat are organic, farm-to-table.  After warm, sunny weather every day our trip, tonight it started to rain.  We walked to the restaurant, a few blocks from our apartment, in a cool, rainy drizzle-very cozy. 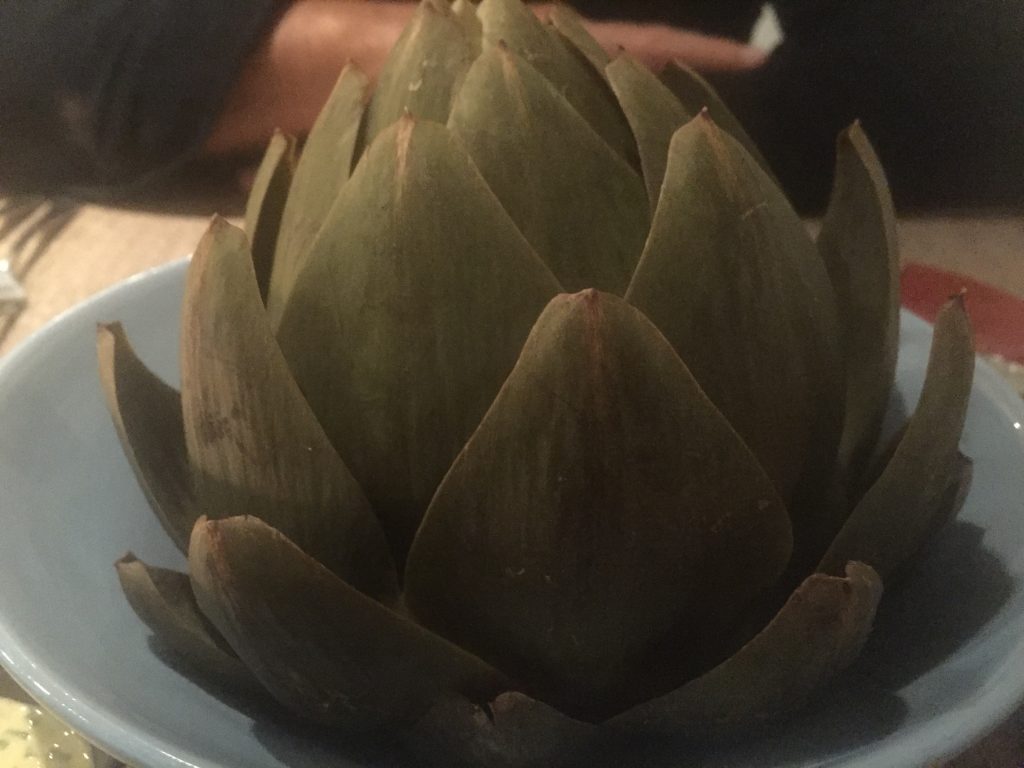 Paul had a chicken dish, and I had pork. 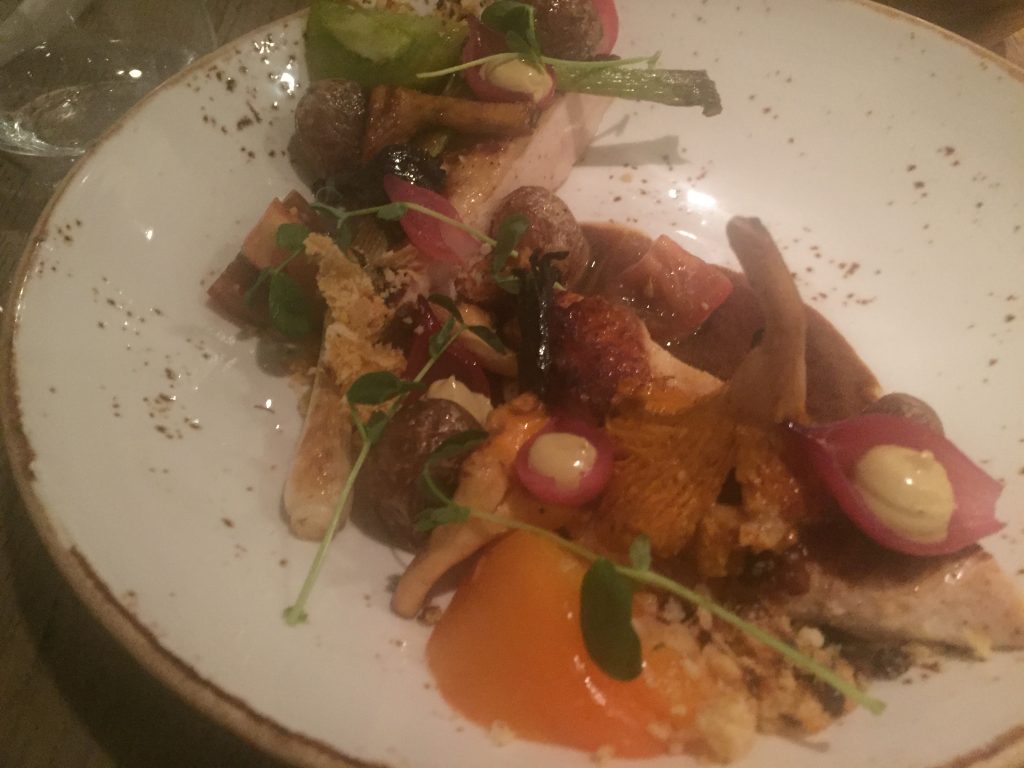 Scenes from the Day 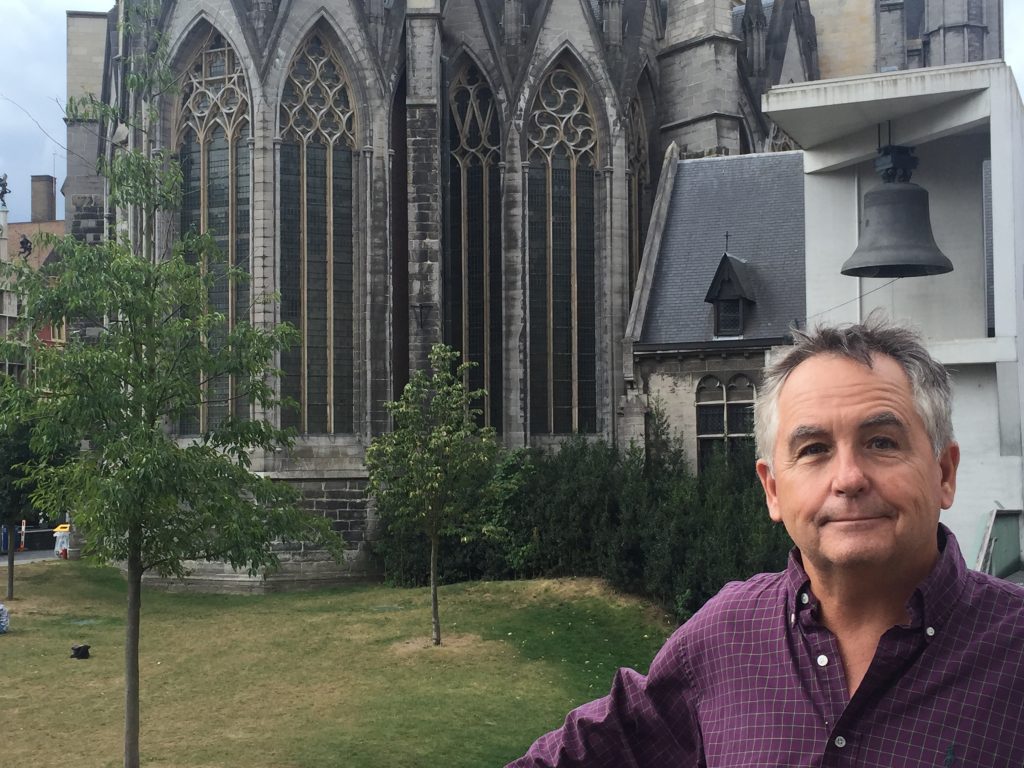 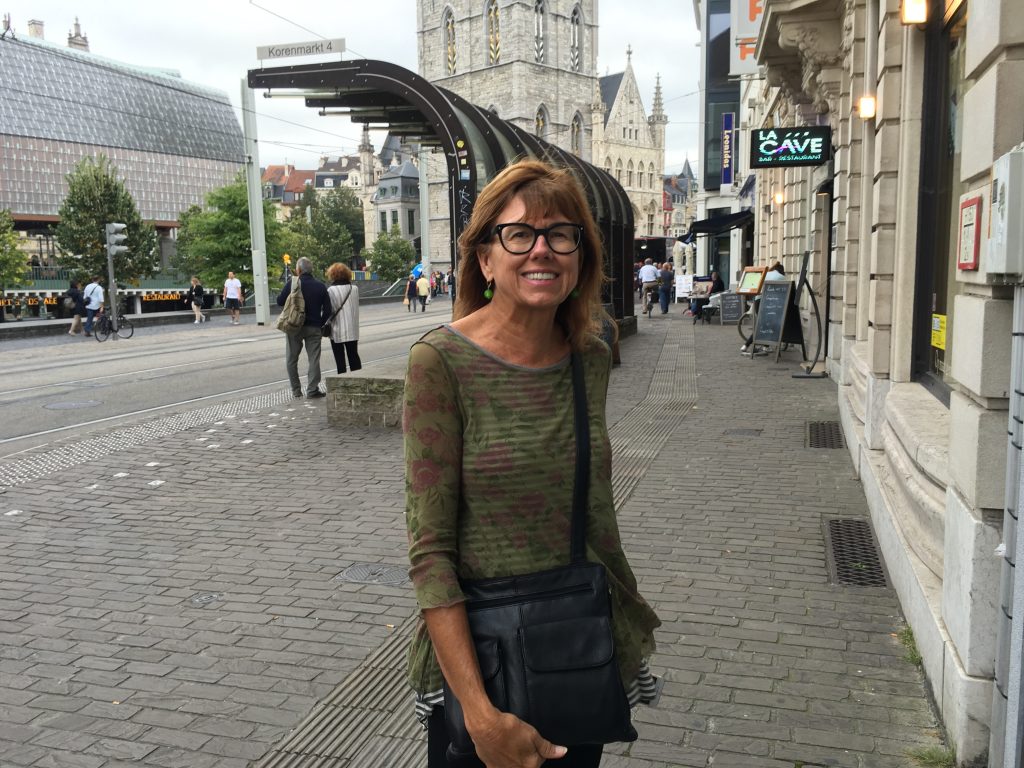 Debbie at the tram stop. 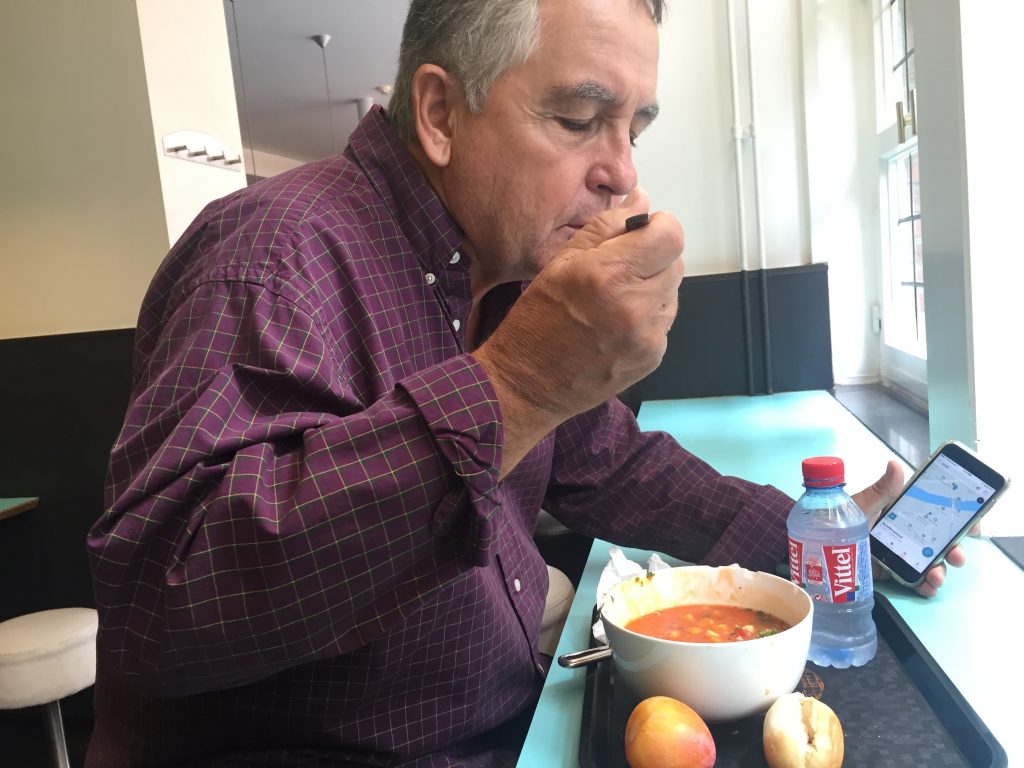 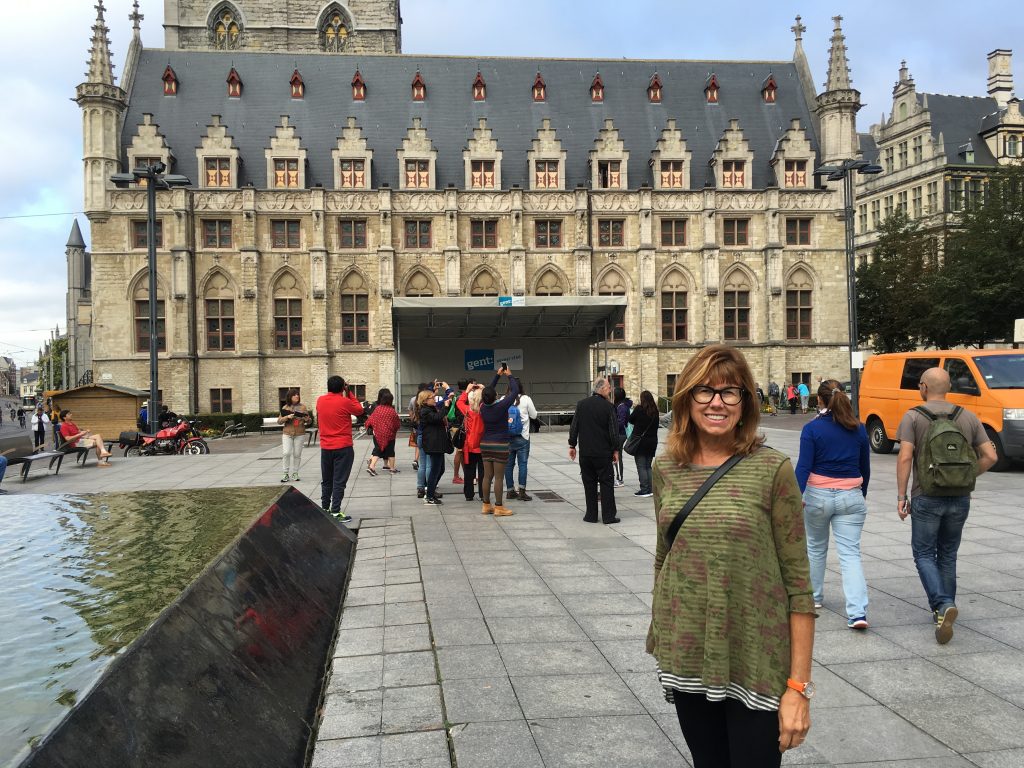 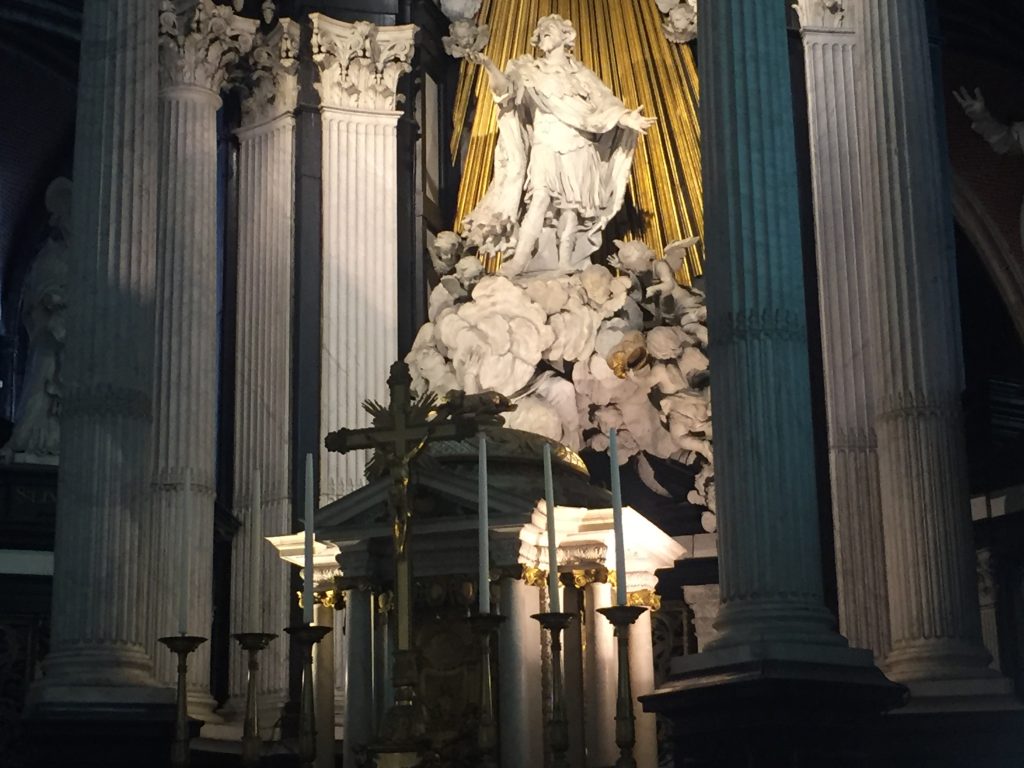