Today we flew from Lima to Cusco, the center of the Inca Empire.

The highlight of the day was a visit to a weaving center where descendants of the Incas harvest, clean, spin, color and weave sheep and alpaca wool into beautiful blankets, sweaters, purses, table runners and other colorful items. Dressed in traditional Inca clothing they demonstrated each step of the process. 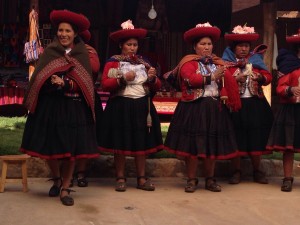 Some of us got to try the different steps in the process, and I quickly discovered that it is much harder than it looks.  Although little girls learn to spin at age seven, I don’t think any of my wool actually got on the little spindle.

It was so moving to see these women practicing a craft the way it was done five hundred years ago.  And they work so hard.  The table runner that I bought took two months of weaving five hours per day to complete. 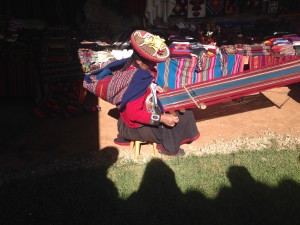 Before the demonstration started, the women served us coca tea.  People in the highlands use coca tea to mitigate the effects of high altitude.  It is also a great energy drink.  I was so excited to try it and was hoping to bring some back.  Unfortunately our guide told us it was not allowed in the US because it has cocaine in it.  Too bad for us because it is a delicious super food, loaded with nutrients.

Driving through one of the dirt roads in the Sacred Valley, we came upon a young boy bringing the family sheep and donkeys home.  With one small rod, he was able to move his sizable herd to the side of the road so we could pass.